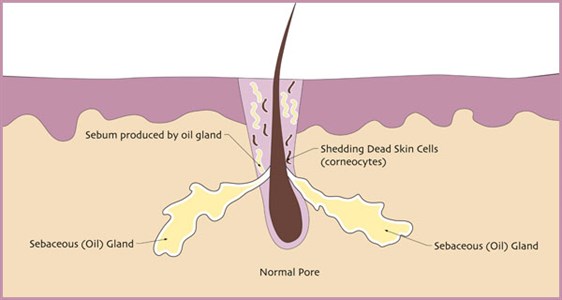 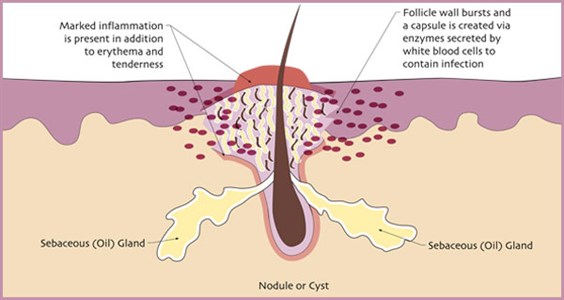 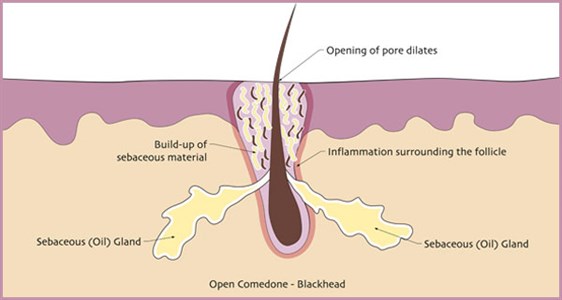 As the dead skin cells begin to accumulate inside the pore, the cells become sticky and get stuck inside the pore and form a plug. Medically, this is called a "microcomedone" - essentially the precursor to all acne.

But, some people don't get inflamed lesions – inflammation is also an inherited tendency. If the dead skin cells and the oil that form the plug don't become inflamed, the plug becomes a whitehead; that is, a non-inflamed lesion under the skin, also called a "closed comedone".

Or the plug can become a blackhead, which is a non-inflamed acne lesion where the pore remains open, also known as an "open comedone." In the case of a blackhead, the tip of the plug darkens as it is exposed to oxygen in the environment. As the oil in the pore builds up, inflammation can develop in the cells surrounding the pore. Blackheads can be infected or not depending on whether the P. Acnes bacteria have affected the cells around the pore.

As the oil and the dead skin cells build up, they put pressure on the cells surrounding the pore. With enough pressure, the sides of the pore rupture and the contents of the pore leak into the surrounding skin. Because this sebaceous material contains a lot of P. acnes bacteria, the surrounding skin now becomes infected, creating a red bump that we know as a pimple. The medical term for this red bump is an inflammatory papule.

As you can see, acne is primarily an inherited dead skin cell problem. Most acne, no matter what form it takes, starts with microcomedones. This means the solution lies in products that penetrate the pore and prevent dead skin cells from building up. That's why your home care routine is so crucial – it's all about preventing the microcomedones (the beginning of acne) from forming at all.